Tyler Hobbs’ Fidenza and the Rise of Generative Art

Fidenza #789 is part of the Everyrealm Collection -- our investment vehicle that acquires potentially high-growth NFTs and invests in NFT-related companies. The portfolio includes NFT works of art, collectibles, and gaming assets. For a closer look, check out our metaverse gallery showcase.

It’s the fourth NFT from Tyler Hobb’s Fidenza project to sell for a seven-figure price.

Fidenza #789, Part of the Everyrealm Collection at the time of writing

Fidenza is an NFT collection hosted on Art Blocks, and while it falls under the category of “NFT art,” it has made a name for itself through its use of computer code to create original, generative artwork.

Tyler Hobbs, the Austin, Texas artist behind the collection, decided to use the name “Fidenza” after discovering a small Italian town of the same name on Google Maps. According to the Hobbs’ website, Fidenza is his “most versatile generative algorithm to date.”

While plenty of traditional artists are using the metaverse and NFTs to create strong communities around their work, generative art built by algorithms is truly the next technological frontier to hit the digital art world. With the rise of generative art and AI-driven art creation systems like DALL-E  2 and Midjourney, computer generated artwork is primed to make a massive impact on creative fields. Collections like Fidenza are a must-watch if you want to stay on top of the latest projects making a splash in this space.

In this article, we introduce you to this unique collection, tell you why its creator is making headlines, and take you deeper into the world of art in the metaverse.

Tyler Hobbs and the fusion of art and computing

Hobbs rose to prominence through Fidenza in 2021, but had been experimenting with what he refers to as “flow fields” since 2016. “Flow fields allow me to produce unpredictable, organic curves. These curves also have the nice aesthetic property of being non-overlapping,” Hobbs claims. “They will always run alongside neighbouring curves without ever colliding.”

For a time, he even studied traditional portrait drawing, figure drawing, and landscapes. The generative art world perfectly combines Hobbs’ love of visual art with his passion for computers, and he’s been a voracious learner of programming and creating algorithms for generating art.

Embracing, rather than battling, the surprising nature of randomly generated art has taken Hobbs places. “The cycle of programming is very experimental”, he says, “…(and) I’m looking for new things, testing out wild ideas, and occasionally adding bugs to the program that accidentally make it way better than it was before.”

Generative Art and how it is Created

Generative art is an entirely new medium of art expression made possible by modern computing technology and AI. Simply put, creating generative art is a matter of writing code that gives a computer various rules and guidelines that it uses to create random artwork.

For Hobbs, the process sometimes starts in his sketchbook, where he writes guidelines for the coding process. Other times, he simply starts writing code from scratch and waits to see what he discovers.

The artist explains that once he has created a fairly simple program, he runs it to see what kind of output he gets. Then, he proceeds iteratively, making changes to the program and re-running it. He repeats this process one or two hundred times before the program is finished. 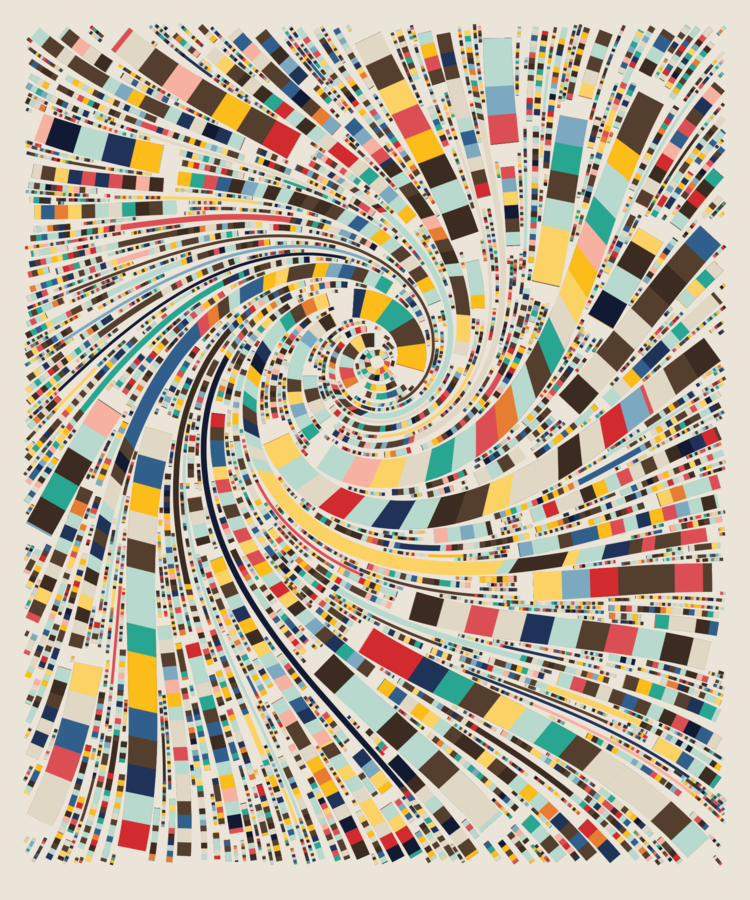 While the art generated certainly is ‘random’, it’s crucial to remember that the ‘randomness’ is carefully built into the program based on Hobb’s (or another artist’s) own creative decisions.

The process usually concludes with Hobbs going through several output images and selecting a few that appeal to him on an emotional level. Finally, he takes the curated images and turns them into unique, physical objects, using a plotter (a robotic device that draws pictures using a mechanical pen) or a local fine-art printing shop.

Ultimately, art is an emotional experience as per the artist, who recommends that creators listen to their instincts rather than try to flaunt their technical achievements.

What is Art Blocks

Art Blocks, on which Fidenza was developed, has become the go-to platform for minting generative art as NFTs on the Ethereum blockchain. Artist selection is competitive, and buyers are integral participants to the creation of the NFTs.

Each NFT image on Art Blocks is generated using a random seed produced during the minting process. Each piece is uniquely created at the time of mint, adding a layer of emergence and originality. Collectors are able to trade these NFTs on a secondary market like OpenSea.

Why NFTs matter to the Art World

Before the advent of the metaverse and NFTs, digital art lacked two important things: scarcity and authenticity. NFTs offer both. The rise of these new technologies has allowed Tyler Hobbs and Fidenza to flourish.

As each NFT is unique, the scarcity of an NFT art piece is automatically guaranteed. Furthermore, blockchain technology is designed to keep records of every transaction that occurs on the network, making the provenance and authenticity of an NFT easy to verify at any time.

There are other advantages that NFTs offer. They push digital art beyond the boundaries of traditional, physical art. They allow buyers to deal directly with artists and sellers, cutting out the middlemen and often leading to better purchase prices. They allow an entirely new market to thrive, reaching larger audiences and enabling tighter communities than ever before.

The issue? It was an art collection created using Tyler Hobbs’ Fidenza program.

On one hand, the creators stress that the NFTs were not copies of the original Art Blocks collection. “We’re not saying we’re not pirates of Hobbs’ code. But at least we’re honest pirates. We’ve officially decided to share a portion of all proceeds with artists whose code we utilize,” they claim.

On the other, Hobbs condemns the “unauthorized commercial usage” of his program, labelling the project “distasteful.”

Although the SolBlocks project does not impact the provenance of the original Fidenza art pieces (which are protected on the blockchain), many collectors consider the move to be dubious from both, legal and ethical perspectives.

With a lot of innovation come a few squabbles, and we might not have seen the last of these as generative art makes its way into the metaverse.

Learn more about the Everyrealm Collection, our managed investment vehicle that acquires culturally important and potentially high-growth non-fungible tokens (NFTs) to be displayed in our beautiful museum in the metaverse. The collection includes Fidenza #789 at the time of writing in addition to other generative art collections and top NFT projects like CryptoPunks, Bored Apes, Cool Cats, and much more.

RTFKT: The Web3 Studio Leading the Way in Streetwear, Travel Gear, and More

Learn about RTKFT (pronounced "artifact"), the content studio owned by Nike that has created one of the most well known brands in the web3 space.

How Ready Player Me Is Bringing Interoperability to the Metaverse

Learn about Ready Player Me, the avatar platform that is bridging the gap between worlds, bringing true interoperability to the metaverse.

An Introduction to Spatial: the Metaverse for Culture

In a world of burgeoning metaverses, Spatial wants to be different. The platform allows users to create beautiful, ‘shareable’ 3D spaces to which one can invite users to collaborate remotely, brainstorm, or share content, as if they were physically in the same ‘workplace.’